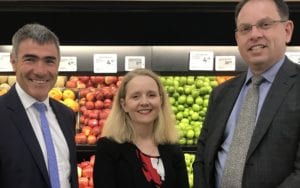 Chief Executive Katherine Rich says that over the years, the Food & Grocery Council has advocated for a full review of laws and penalties relating to malicious tampering with consumer goods, which includes food, beverages, pharmaceuticals, natural products and other non-food consumer goods.

“Our support for change is not just in response to high-profile tampering cases over the past few years, but because our members have believed for some time that the law does not adequately deal with all aspects of malicious tampering, and needs to be strengthened.

“New Zealand’s economy relies on the export of high-quality foods, beverages and other consumer goods, so our law needs to send strong signals that contaminating food is a serious crime that has consequences, not just locally but in terms of harming New Zealand’s reputation in global markets.

“I’m sure the food and grocery sector hopes that the whole Parliament will support this bill, should it be drawn, so it can at least be discussed at select committee level. It appears to have support already from a number of significant industry associations, growers and farmers.”

Last October, FGC wrote to the Government suggesting a review of the law regarding malicious tampering and consumer goods following the high-profile ‘needles in strawberries’ issues in Australia, and further copycat incidents there and in New Zealand. In November, the Minister for Food Safety responded that an MPI review in response to a 2015 analysis had found that there were a wide range of offences and penalty provisions that could be used to address such incidences, and that “Our position on this matter has not changed and our laws have continued to be fit for purpose.” (see November 30 story in the Issues section of this website)